Last night I dreamed I was drinking a glass of red wine at a cafe in Obidos while gazing up at the beautiful Pousada Castelo. I suppose it was this recent article about the Literary Man Hotel (Restaurant and Gin Bar!) that set my mind on Obidos and prompted this nocturnal “visit” to one of my favorite locations in the world. Who knows what prompted the dream… but the end result was a flood of beautiful memories and a strong desire to chuck this year’s vacation to Florence in favor of a return trip to Portugal’s Silver Coast. Indulge me while I enumerate the reasons why…

1. The Mosteiro de Santa Maria de Alcobaça.
Of all the churches, cathedrals, and monasteries I have visited, this Early Gothic Cistercian Monastery in Alcobaça is hands-down my favorite. From the vaulted nave to the arched courtyards and tiled kitchens, this UNESCO World Heritage Site is absolute perfection. Words escape me – I’ll let my photos do the talking.

2. The Literary Man Hotel.
I don’t know about you – but any hotel that was formerly a convent, has been comfortably renovated w/modern amenities, filled with books and has a Gin bar where they serve “literary cocktails” (inspired by the likes of Hemingway, Fitzgerald, and Kerouac) gets my vote! I could stay a year. (if you’re not into literary destinations… check out the Pousada Obidos – a luxury hotel situated in a medieval Castle in the old walls of Obidos)

3. More monasteries.
Anyone who knows me well is aware of the fact that I am a sucker for vaulting and repetitive arches – and Portugal monasteries feature some of the best. A walk through the Mosteiro da Batalha is a constant delight as it segues from Late Gothic to Manueline architecture. Nearby one finds another favorite – the Convento de Cristo and Castle of Tomar was founded by the Knights Templar and is today designated a UNESCO World Heritage Site. Combining Romanesque, Gothic, Manueline and Renaissance architectural styles, this is the kind of place that can keep my lens busy for hours.

4. Two of the best meals I have ever had – not to mention some pretty fabulous wine.
I often judge vacations based on the food – and Portugal did not disappoint! Located right across the road from the Atlantic shore I was treated to a simple fish dinner in a non-descript fish restaurant – the name of which I cannot recall – but the fish – with its head and its tail still attached – was possibly THE MOST MEMORABLE meal I have ever had – simple, succulent and stunning. Up the road in Obidos – rich Portuguese fare in an atmospheric setting conspired to place the duck cassoulet served A Nova Casa de Ramiro in my list of top 5 favorite meals. Of course, I cannot discuss food without an accompanying glass of wine – or in this case jug of wine. While stopping at a gas station just outside of Obidos – we noticed a white plastic jug labeled “Vino Vermelho €3” it was topped with wax paper secured by a rubber band (who needs corks) – this was too good to pass up. We purchased the “Vino Vermelho” and returned to our hotel. That evening, while watching the sun set over the Atlantic Ocean, we enjoyed some of the most seriously decent wine we have ever had. (I wish I would say it was great wine – but given that it was aged in plastic – “great” would have been quite a stretch – still – for the money – it was damned acceptable).

Most likely it is too late for me to revise this year’s vacation plans – but I know that this list does not do justice to all the beauty and wonder that is Portugal – so I will definitely be going back… someday. 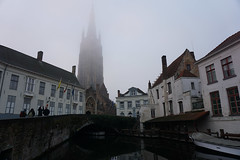